← Join me
Queens of Egypt →

It’s amazing how a few hundred miles can make such a difference in cultures. Montreal not that far West of Saint John New Brunswick and Halifax yet things are very different. Most noticeable is the lack of English both spoken and displayed on road signs , menus, television etc. as well as the friendliness of the people.

Along with the strong French influence you will find many of the people rude. I totally understand being annoyed with tourists, I work in an area with a large population of summer tourism and it gets overwhelming. The people here are rude to each other as well, it had nothing to do with tourists.

I never finished French Class and it’s not a priority language for me to complete. Thanks to google translate I was easily able to decipher the dinner menu beyond my educated guess.

We wandered around looking for food and landed at  Merchant Boeuf  it looked like a nice upscale place. We looked at the menu outside and decided to give it a try. The host said they were only offering brunch. Beware if you are hungry after a long trip this place is not for you. The choices were limited to about 5 items. My husband had sliders, I usully take photos of our food (awasome food ) I wish I thought to do so this time. There were three buns with a tiny meatball on them and I am NOT joking when I say they were SMALLER than a Quarter or Loone for the Canadians. I ordered a Greek Salad it was served on a plate smaller than a saucer and the olive was two squirts of Olive Paste.  The only filling thing was my beer an amazing tasting Oatmeal Stout from St. Ambroise.

We finished our Beer paid the $ 86 bill and left. We walked around for about 15min. and it looked like rain. The street we were on had many restaraunts with outdoor seating and since we were still starving we took a seat at Maggie Oaks.

I had a large order of fish and chips, I don’t recall what my husband ate. Both of us had beer,dessert,and coffee and the bill was still less than the other place.

This time we left feeling like we had a meal. The rain had caused a quick decision that didn’t involve research. After ordering I discovered Four Square only rated the place a 5.5 thankfully they were wrong it was at least an 8. 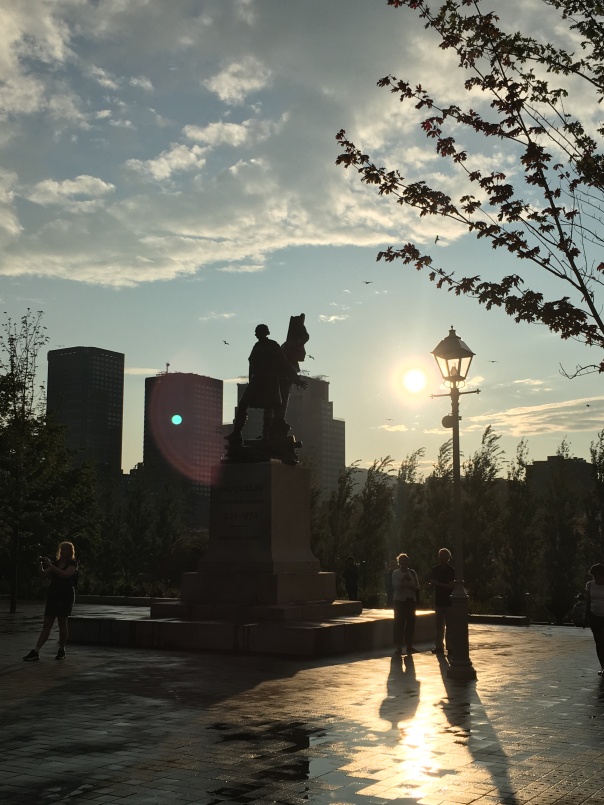 The following day we headed out early to Notre-Dame Basilica.

In 1824 the Construction began , the Architect was James O’Donnell. There have been additions and changes over the years. The construction of the towers began in 1841 and was completed in 1843. The Western Tower houses the great bell which weighs 10,900 kg. 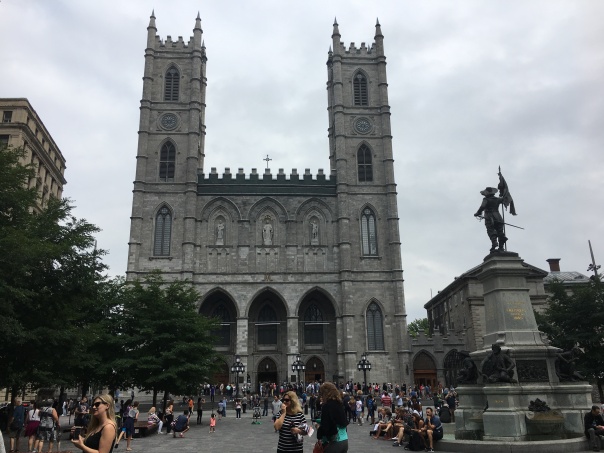 In 1874 the interior was beautified. The Organ built in 1891and modified a few times has approximately 7000 pipes. Unfortunately vandalls set fire to the Chapel on Dec. 7th, 1978 that almost completely destroyed it. It was rebuilt between 1979 and 1982. 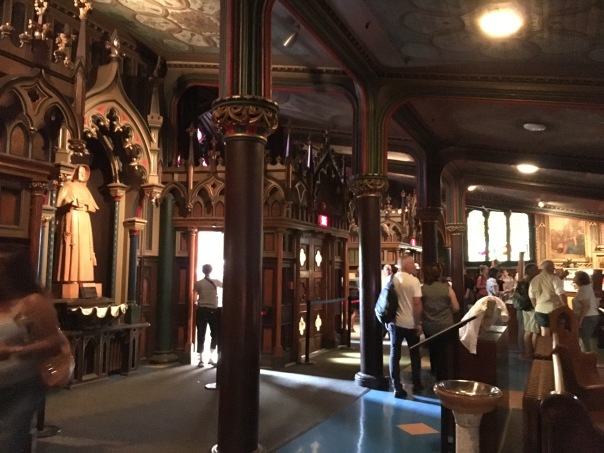 I am a Certified Travel Associate (CTA), having earned my designation from The Travel Institute, the oldest and most respected non-profit certification organization in the travel industry. I have also earned my CCC and ACC from CLIA the Cruise Line Industry Association as well as multiple other certifications. Let me help create your best experience. Know that you can contact me personally, not a call center if you have an issue during your trip. Things happen, weather happens but I care about you because I know you. I have a vast network of connections to help with all of your needs. I am regularly traveling and educating myself on new destinations and visiting with my suppliers to keep offering Value and Amenities to my Clients. “It’s all about the Journey” Making your dreams a reality. #atouristlife These credentials require that I have at least 18 months of travel industry work experience, completed rigorous certification and testing, and continue to fulfill stringent education credit requirements each year. Much like an accountant or doctor with their respective credentials, my CTA designation means that I am committed to upholding the highest standards of my profession while providing expert advice to my customers.
View all posts by Atouristlife »

Posted on September 17, 2018, in Places, Uncategorized and tagged #BasiliqueNotreDame#Montreal#Canada#Quebec, #travel#blog. Bookmark the permalink. Comments Off on Montreal.

← Join me
Queens of Egypt →